Before you go men bashing, check yourself--because you could be wrecking yourself.

Shame lies with the abuser, not the victim. Photo Courtesy: Wikimedia

The words rape culture and India have become synonymous with each other of late. When we think rape, however, we think of men--and the patriarchal set-up we all co-exist in which teaches us that vagina and breasts are a weakness, and penis the biggest there is. So naturally, rape culture stems from Indian society as a whole. It's the construct that is to blame, not those who dwell in it--irrespective of their gender.

That said, society is made up of people. And if the people change the way they think collectively, so will society. Which is why, we would like to shed some light today on things, we as womenfolk, have been doing wrong. Things which promote rape culture--even if we don't mean them to.

If You Make Excuses Like 'Men Will Be Men', Then You're Guilty

'Men will be men'. With this one phrase you're allowing men to get away with every horrible action. Any kind of abuse-physical, mental, emotional-does not qualify to be overlooked because of gender. Mothers should not be telling their married daughters to live through it and make do, because "Beta, men will be men. And you after all, are a woman". No woman should be told to bear with it because eventually it will go away. Or that it's 'his way of showing love'. Violence can never be an act of love and promoting it as such is only accepting it. Just how is that right?

If You Have Asked a Women To Stay Mum About Her Assault, You've Promoted Rape Culture

We really need to raise a generation of women who are conditioned to finally believe that her parents' honour does not rest within her vagina. The moment you silence a woman, you have placed the blame and the shame on the victim. You have blamed her body for being the reason why it happened to her. It's really strange, the idea of shame an abuse victim is subjected to. Because you know what, the woman didn't want to be assaulted. She did not go looking for a man in a dark alley to rape her. Still, some entitled f*ck took the liberty and forced it down on her. So how's shame so misplaced here? In that case, broken traffic rules should be bringing the department down. You getting the drift? Stop doing it! 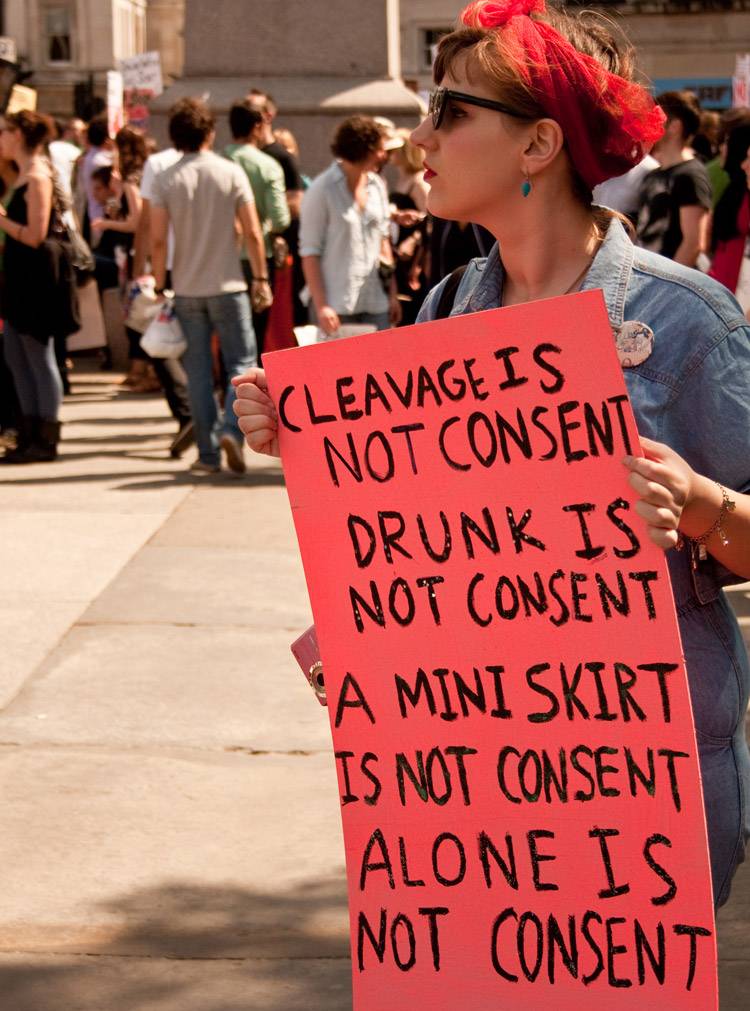 Shame lies with the abuser, not the victim. Photo Courtesy: Wikimedia

When You Ask a Survivor What She Was Wearing, There's Something Terribly Wrong With You

And in all probability, it's the patriarchy. Because guess what, a woman's short skirt does not mean consent; neither does her bold red lips, or her backless top. It's tiring to tell and retell that what a woman wears is nobody's business but hers. So when you ask her if she was wrapped in a cocoon of clothes, you've not only subdued her freedom to wear what she wants--but also placed blame on her. You've given an approval over a list of had-you-nots. Stop making excuses because nothing could be done to prevent a travesty that happened only because consent was not taken seriously.

Hating a Woman For Dating Your Ex Promotes Rape Culture Too

This is so basic, yet so hard to understand for women. He may have left you for her, he may have cheated on you with her, and he may have done a lot of other things with her to make your blood boil. But the fact remains that HE did it. He is the one who chose to do certain things that made your life miserable. So placing the blame for all that on a woman is shaming her for the deeds of a man. That misplaced blame is also rape culture. It a positive nod towards all the oldest and worst tropes of slut shaming and we're all evolved enough to understand it's wrong.Let her be.

In a world that still needs to grasp the idea of women being equal to men, there's an urgent need for women to stand by other women. Don't let the conditioning brought about by patriarchy rule the tenets of your life. If we don't see our sisterhood as fellow human beings, how will we convince others to?