With only two movies to her credit, Parineeti Chopra has already wowed all. In a candid conversation with Bazaar, she lets us in on the life she didn't choose for herself.

Through her growing-up years in Ambala, Haryana, in northern India, Parineeti Chopra had only one dream, one ambition. The Ladies Vs Ricky Bahl and Ishaqzaade actress did not see herself in chiffons that billowed against the Swiss Alps, or in couture outfits on a red carpet giving thank you speeches as she received acting accolades. She only saw herself as an investment banker.

She pursued this too, graduating from Manchester Business School in 2009, when the economic recession was at its peak and jobs were few and far between. Little did she know then that the move back to India and a job in Yash Raj Films' marketing department would be the first steps that would lead her onto an entirely different path.

"Till then, I had looked down upon actors and acting. I thought that all it required was to look good, deliver one or two lines of dialogue, and roam around in big cars," says the 23-year-old. It was during her internship at Yash Raj Films that Parineeti "fell in love" with acting. "It was only then that I understood what acting really was, why actors are so sought-after, and how it is not a floozy, flimsy job. It takes intelligence to convince a billion people that you are that person you are playing on screen; and a different person every time. I understood how what you do in front of the camera, matters." 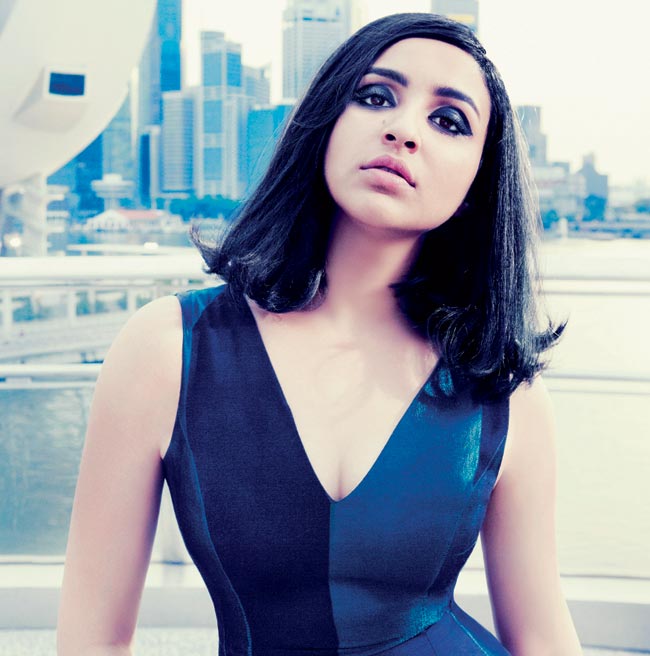 When realisation dawned, Parineeti resigned from her post and planned to join an acting school, but fate intervened once more and Yash Raj Films offered her a three-film deal. Two years and two films later, with a boxful of best debutant and supporting actress awards to her credit, Parineeti has come a long way from the overweight (she says she was 90 kilos) "nerd" that she used to be. "My father could not understand what I was doing working in a film company and why I had returned from the UK. Our family was always aloof from the film industry. So, after I recovered from the shock of the offer from director Maneesh Sharma for Ladies Vs Ricky Bahl, I had to figure out how to tell my father," says Parineeti.

So Parineeti, then 21, flew to Ambala to break the news to her businessman father and homemaker mother. The expected shock and concern followed, but now, "they love it. It's like their achievement," says the young actress. "It helped that they had seen my sister's success," she says, referring to cousin Priyanka Chopra. "Hearing her speak about characters, shoots, and filmmaking made them feel that acting may not be so bad after all. But I was no Miss India. I am not that person who dreamt of this career from my teens. If it were my dream, I would have checked off that list of 'things to do to become an actor'. But I love the art of acting, of being on set. I am not attracted to glamour but I will change myself for a role. I am a fan of Kajol, Rani Mukherji, and Vidya Balan-that is also my path. If glamour had attracted me, then I would have been skinny."

Confident, self-assured, and independent, Parineeti recalls her first time on a film set. "That first schedule in Delhi was also the first time I was on a film set. It was my first everything! Even when I was in makeup, it didn't hit me. I had seen the procedure before, so I was excited to have my spot boy, driver, and vanity van. I knew I had to get makeup done, try out costumes, learn lines, and go on set. Surprisingly, I was not nervous; just excited." But when she saw 200 people on set, Ranveer Singh on his mark, and a crane get into position, that's when it hit her: "Oh my god. I remember thinking I have to do something now." Director Sharma okayed her very first take. "That's easy, I thought," recalls Parineeti.

Now when she sees clips from either of her two films, she feels both were ages ago. "You grow very quickly. I have already grown out of both these movies. A year ago I was working in an office; then I became a heroine; now I have two releases and a bunch of awards. It's not really sunk in and I am living life a day at a time."

Hand-in-hand with celebrity and stardom are criticism, scrutiny, and deconstruction, from clothes and styling to acting (of course). What Parineeti wears is largely dependent on her mood-the primary criterion is comfort; and she acknowledges that she has good and bad days. And she's truthful enough to admit that she is willing to learn from her mistakes.

"I am not a fashion victim who will say these pumps are a day old so I will not wear them! If I have an off day today, I will try and look better next time." Her staple 'chill-out' ensemble comprises a tank top or an over-sized T-shirt worn with pajamas or linen pants, hair tied back, and flip-flops. "I have more than 60 pairs of footwear, but not even one of them is a pair of heels. I dislike stilettoes and jewellery," she says. "I am also crazy about bags."

Parineeti does admit to having trouble in getting an ensemble right, and is candid about the help she gets in putting it together. "I wear gowns and Indian clothes if I have to. I can say what silhouette I like, but someone else will have to go out and get the right outfit for me. I am not into labels and designerwear," says the rising star who enjoys shopping, but for gadgets and shoes. And when it comes to clothes, she usually picks up tank tops and shorts from Mango, Zara, Forever 21, and Vero Moda. Quality and colour are paramount. Her style statement- "Colour. I will always wear one colourful thing that will jump out at you, like a yellow bag or fluorescent green footwear."

There is already a transformation in Parineeti that is moving away from the tomboy with a devil-may-care attitude, which prompted her to step out from behind a desk and in front of a camera. Parineeti accepts that she is a public personality, but not the kind to forsake her individuality. "I still do what I like but I take more care, and I will never change what I believe in. Look at me now-here I am doing a photo shoot for Bazaar, which I had never imagined I'd be on the cover of," she beams, sipping on a cold coffee. "My metabolism is crap. I just have to think about food and I become fat," she says with that trademark candour, adding that she has a weakness for pizza. But with youth on her side, she also drops the kilos quickly when she needs to get fit for a role.

Parineeti's youthful zest is infectious. You could see that spark in the character of Dimple Chaddha, the 18-year-old Punjabi brat that she portrayed in Ladies Vs Ricky Bahl and in the feisty, aggressive, young Zoya in Ishaqzaade, a role for which she garnered rave reviews. Currently she is ploughing through a stack of scripts, trying to figure out the next couple of projects that she would like to be involved with; the actress also says that she has a secret list of filmmakers she would like to work with. "But that's only for my diary," she quips.

But ask her what kind of roles she would like to do and without hesitation she replies, "Each and every Rani Mukherji film. Let's rewind 15 years and I want to do that film. I love her, and I have told her that a thousand times." She has no doubt about the hand of destiny in her life. For her, acting is not a do-or-die deal. Parineeti admits she has the security of her degree and her parents' support to fall back on. "Do you know my name means destiny?" she says. "And because I love acting I want to do a good job." Destiny or design, for Parineeti the only way seems to be up.