Even the Delhi metro can't save you from being harassed. 6 women tell their harrowing tales

Metro has joined the club of unsafe mode of transports for women. And it's sad.

If you live in Delhi or the National Capital Region, metro rail is like your second home. You spend most of your day riding in it and it's made your commute much easier. After all, even if you don't get a seat to perch yourself on, it's air-conditioned. And that's a relief. You get saved from the scorching summer, and even the harsh monsoon rains. Although, there's one thing even the metro can't save you from--sexual harassment.

There's no denying that women get a compartment of their own to travel safely, but at times, lack of space forces many women to board the general compartment. And that's when the horror begins. Surrounded by men, you can't do much when someone grazes the back of your thigh or gropes you accidentally. It's convenient to blame the crowd for the occasional rubbing. But, we women know better. That innocent brush against the swell of the breasts is not unintentional. It's to derive cheap thrill at the expense of unsuspecting women.

Recently, a Delhi girl took to Twitter to share her harrowing experience. The user called Megha was stalked by a man at the Golf Course Metro station in Noida. In fact, he not only followed her while exiting the station, but also tried to push her into a dark corner. After she cried for help and slapped him, the pervert took off.

I still don't try to be unfair and test waters by stopping regularly at steps. He stops with me. I rush to the car and he tries to push me.

Into a shady corner at the end of the staircase. I push him away, slap him.And make a LOT of noise. I ask him to stop and so I can catch him

However, this is not a sole incident. Many women have suffered similar incidents despite the presence of a crowd and security personals deployed at the station. So, we asked a few women how safe the metro has been for them and if they have had similar experiences. Their answers, though, did not surprise us. But, they will definitely make you cringe for sure. If it's a long journey ahead of you; you most definitely can't afford to snooze because you are surrounded by perverts. Kanika* learnt this the hard way. "I was dead tired, so I dozed off while holding the pole right in front of me. When I woke, I saw a man rubbing his crotch against me. I was totally grossed out," she says. Monisha* was running late as she had to make it to her hostel before the curfew. She had to reach her college by seven thirty and since she couldn't wait any further, she got into the general compartment. "I felt a man grabbing my ass. When I asked him to cut it out, he said, 'Madam, toh ladies compartment mein chadna than na.' Imagine his audacity!" 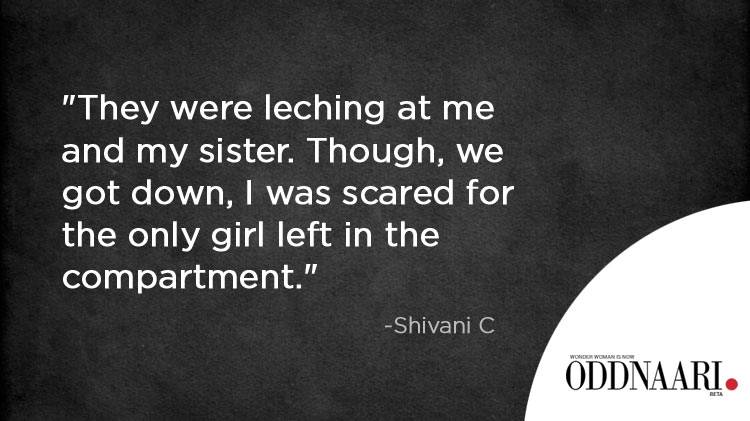 Also, metro is not the safest mode of transport at night, contrary to popular reports. And this incident proves the same. "It was around 10:30 pm when I boarded the metro along with my sister from Lajpat Nagar. Soon after, a couple of goons got in. They kept leching at us and kept singing cheap songs. The compartment was completely empty and there was just one another girl, besides us. Though, we got down at the next station, I was terrified for the only girl left in there," says Shivani. It was a complete nightmare for Riya* as she was stalked by a complete stranger while getting out of the metro. "It was around 8:30 pm and I was wearing a dress. This guy kept staring at my legs and it made me really uncomfortable. When I got down, he started following. Things got so bad that I had to run. But, to my horror I realized that he was running after me. I ran up to a security guard and complained about him," she recounts.

Such brazen acts of audacity are rather surprising. From where do such men gather the courage to molest women with people around them? Well, Meghna has a similar incident to share. "I was in college then, and the concept of a separate compartment for ladies didn't exist. It was late in the evening, though the metro was terribly crowded. The metro was approaching Connaught Place when I felt something rubbing against my butt. At first I dismissed it as a bag pressing against me. However, soon enough I felt a hand on my waist and I could hear someone groaning behind me. I could feel him grinding against me, but I was too scared to even raise my voice," she says. Such incidents really make one wonder whether it is safe to travel by metro at night or not? And Aisha*, too, has second thoughts about taking the metro at night after an incident that completely spooked her out. "I was holding onto a pole in the general compartment. Though, it was pretty late, it was really crowded. Suddenly, I felt a hand grazing my breasts. When I reprimanded the man, he said, 'Jagah kaha hai.' Really!"

It's a sad state of affairs. Women are afraid to take cabs, travel by bus, and now--metro too has joined the club of unsafe transports. It's indeed sickening. Should women just lock themselves up in their houses to keep themselves safe? Although, the politicians and the hardliners would just love it, this is definitely not the solution. Something needs to be done, and we should begin by making public transport safe for women.

*Names have been changed

Also read: When auto drivers threaten women with rape over fare, how can we expect them to be safe on roads?