The terminally ill Michele took cervical cancer head on and embarked on a unique journey to inspire others.

The terminally ill Michele Baldwin took cervical cancer head on and embarked on a unique journey across the Ganga to inspire others to live a full life. Read the story of her epic adventure.(SEE SPECIAL)

Last year, I learnt that my metastatic cervical cancer, detected in 2009, was untreatable. My mind was a rush of emotions: an initial disbelief turned into grief, anger and finally, acceptance. I knew I had to be strong for my three kids (12, 17 and 19).

I knew it was going to be tough breaking the news to them. My youngest girl burst into tears-even the warmest hug couldn't soothe her. The thought of how they would cope without their mom worried me then, as it does now. I took stock and decided to make use of the little time I had, not let cancer dictate it.

Most people have a lifetime to reach their goals. But I have realised the value of time- earlier I'd brood over a setback for months, but now I spend just a couple of hours thinking about it. Yes, impending death can really speed things up for you. Pilgrimage and charity were two things on my list- saved for my grey years. But I didn't know that I was going to be combining the two so soon, and how. 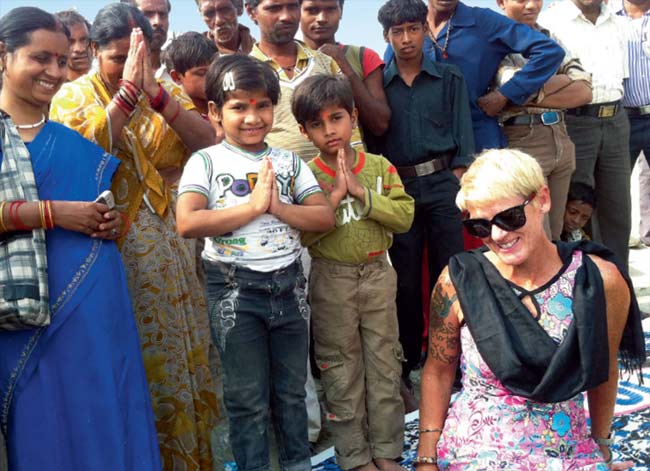 I've always been a bit of an adventurer; I've been a canoe and kayak guide and rescue swimmer. I learnt to paddleboard in August, and it was then that the idea visited me. The holy Ganga whispered it in my sleep. So here was the plan: a fund-raising water trek across the Ganga from Rishikesh to Varanasi-stand-up paddling about 1000 km-to spread awareness about the number one killer cancer among Indian women. My mind was, of course, fighting battles-I was afraid of leaving my kids behind, knowing I might not return, but I wanted to do something so other kids do not lose their moms early, at least to cervical cancer! When I searched the Internet and found that no woman had ever attempted this trip before and saw everything falling into place (the Global Initiative Against HPV and Cervical Cancer agreed to my proposal and we found sponsors for the expedition), I knew it was ordained. A final yes from my little girl who wrote me a message on my foldable tent, and I was ready to go.

I embarked upon the journey on October 17, accompanied by my friend, navigator and cameraman Nat Stone. For the next 25 days, here's what my typical day looked like: we started paddling around 8 am for about four hours. Then I would rest for an hour floating and having lunch. Then we paddled again, making about 40 km each day. We made several stops along the river, interacting with the local people and clearing misconceptions they had about cervical cancer. I would feel lucky if I was able to make even a little difference by sharing the wisdom on the disease. We camped on white sandbars on the coast almost every night. Falling asleep under the starry sky to the howls of jackals and the faint sounds of chanting and prayers wafting out of ashrams afar was an amazing experience.

The journey was emotional, spiritual and symbolic, all at once. The rapids near Rishikesh were incredible. The water was clear and the waves were breaking in all directions-I actually got to surf, which was lovely. Along the way, I attended the funeral of a woman who had died during childbirth; it was an intensely emotional experience.

She had left behind four kids. I immediately thought about my impending death and my three kids and was filled with greater resolve to fight the disease. I remember being filled with terror when I saw floating corpses in the river. But the Ganga accepts everybody, we must too. I realised that living and dying and the inevitability of this cycle was something Indians are familiar with, but Westerners shy away from. The Ganga spoke and I listened. The river is a symbol of life. It's always moving, always present, it gives and it takes away, it changes course but it never dies. It teaches you to go with the flow of life. Paddling on the river kept me alive-and moving.

It was healing as well. I felt no pain when I was paddling. But the pain would come back with a vengeance when I stopped. I wanted to be able to continue paddling, but I simply didn't have the energy.

I felt no pain in the first week, but I cried myself to sleep in pain through the last. During the course of my expedition, I also had a nasty cut on my foot, but healed miraculously in a day. I didn't have to give up. And that I managed to complete the journey I undertook and am back home in New Mexico with my kids now is no less a miracle.

My health is failing me now, but I'm happy that I have been able to leave behind a vision for my daughters as well as the women of India.

You can donate too. Go to http://www.giahc.org/howyou-can-help/donate.html