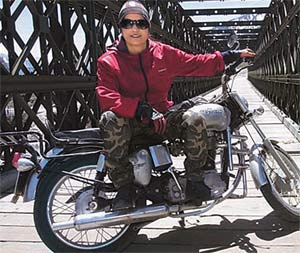 It's never too late to be whoever you want to be. Forty-nine-year-old Moksha Jetley lives by this philosophy. At an age when most women are settled comfortably into their lives, Moksha gathered the courage to make moves that she had been thinking about for for twenty years and changed her life completely. She chucked her job and headed to Manali to open an adventure company, Backn-Beyond Travels, which takes adventure enthusiasts on motorbiking expeditions to Ladakh, Lahaul and Spiti. "I never liked desk-bound jobs and put up with mine in the hospitality industry because I had to raise my daughter. When my daughter graduated, I decided to start my life all over again," says Moksha. Moksha developed her love for motorbikes early in life.

As a child, she would vroom her father's scooter through the streets of Hoshiarpur and enjoy rides on friends' motorcycles. Marriage at age twenty wasn't the best decision and Moksha was a single mother not much later. In 2008, Moksha enrolled in a mountaineering course in Manali after her daughter graduated. After this, she worked for a while in Delhi, but eventually decided to move to Manali.

With no assets and very few savings, life was tough. Moksha survived the first few months in Manali by teaching English before she got her first motorbiking tour. In 2009, she led a British group to Spiti on a ten day biking tour.

Since then, there has been no looking back. Last year she went to Ladakh with an all women group from New Zealand, Germany and Austria. And, this year Moksha led six Indian men from Dubai to Ladakh. "I feel so proud that I am the only Indian woman who leads such motorbiking expeditions to the Himalayas. People now write about me," says Moksha laughingly.