The tipping point came three years ago. For too long, she had been putting on weight and putting off life.

The tipping point came three years ago. For too long, she had been putting on weight and putting off life. I'll scuba dive when I can fit into a wetsuit. Go on a sea plane when I don't have to reveal my weight. Go to the reunion, the uber-cool party when I'm thin. Her life was on hold, she was always tired, had to dress in frumpy clothes, could not keep up with her energetic toddlers. "I decided I wanted my life back," she says. 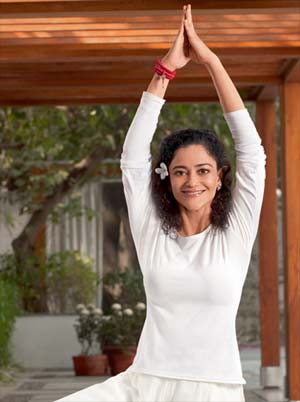 Photograph by Tarun Vishwa
Forty-five kilos lighter and having managed to stick to that weight, Kalli has achieved what she calls, "weight nirvana"- the state in which you can look the weighing scale in the eye! It did not happen overnight. There were several setbacks and attempts at weight loss, but the kilos always crawled back. Eventually, it took a glamorous dress to give her that final push. The 'goddess dress' she wore to her sister's wedding ultimately helped Kalli reach her happy weight; she'd dropped 14 dress sizes-from 22 to 8!

How she did it
Burying her past (fat) demanded a lifestyle overhaul. From mindless bingeing, she switched to a healthy diet. From a sedentary lifestyle, she became an exercise addict. She did yoga, "It builds a bridge between the body and mind." And she began to run. It was a complete turnaround-from running away from weight issues she was running to stay on track.

The task now is maintaining the weight she is at. It's a challenge most of us face. "Shedding weight is so liberating, you forget all the pain you went through to lose it. A bit like delivering a baby. That's why you have a second, or put on weight," she laughs. So her advice is to keep that intimate relationship with your weight alive. To ensure she stays on track, Kalli has evolved her own set of 'thinterventions' involving family and friends (and a self fat test). Her friends know they have to stop her if she's stuffing popcorn while they're out watching a movie. Her children gently tick her off if she's quietly stealing potato fries from their plates.