Apparently, her condition is a "result of her sins".

While we all take our regular postures and actions like walking, standing, sitting, and sleeping for granted, a nine-year-old girl from Mithi in Pakistan's Singh province is suffering from condition that has made her life extremely difficult.

The young and innocent Afhseen Qumbar's head hangs at a 180-degree angle, which means that she is unable to keep her head upright, stand or walk properly. Thus, she is restricted to a sitting position and also needs help to eat and use the toilet.

The actual reason for her condition happens to be a rare muscular disorder. However, according to the people of Afhseen's village, it is a result of her sins. And because they are scared of her, the only friends she has are her six siblings since she doesn't even go to school or move out of the house. 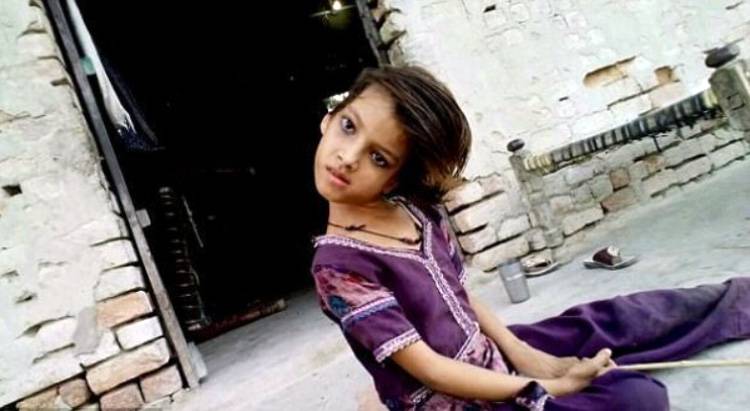 She has movements are restricted. Photo Courtesy: Twitter/OfficialJwBlog

As per a report in the Daily Mail, her father Allah Jurio, 55, said, "People say bad things about our daughter. They often laugh at her. It really hurts us. We cannot tolerate people's attitudes and discrimination. People avoid her sight so we keep her at home. We want her to study but no one will accept her in school."

What makes things even more difficult for Afhseen is the poverty-stricken state of her family who is solely dependent on their eldest son Mohmad Yaqoob, 25, who works at a private shop and earns less than 17,000 INR a month. Hence, they are unable to afford the required treatment for Afhseen.

"None of the doctors here could diagnose her condition. They have advised us to take her to Jinnah Post Graduate Medical Centre in Karachi. But we do not have money or resources to a bigger hospital for treatment," said her mother Jameelan.

Her mother even said that Afhseen was born a healthy child and her condition worsened when she was eight months old and hurt her neck after falling on the ground while playing.

"We ignored her condition initially and due to lack of money we used to take her to a local faith healer but her condition never improved. As she grew older, her problems became complicated. She isn't able to keep her head upright at all and often complains of pain in the neck," explained Jameelan.

Afhseen's desperate parents have pleaded for help from the Pakistan government and we hope that they take care of the little child so that she can lead a healthy life.